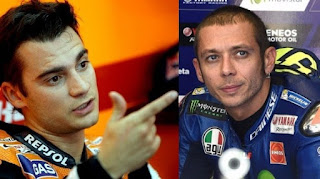 Monsterbalap – In the grand prix Aragon, Spain yesterday Valentino Rossi completed the race in fifth position. Rossi started the race from third position after struggling in the qualifying session.

At the beginning of the race he had struggled for the leading position, but unfortunately the position is getting backwards because the rear tires began to erode. Rossi also got protests from Pedrosa over a dangerous Rossi maneuver.

Pedrosa: “When viewed from the photo, it is clear I am in the white line and my handlebar is very close from Rossi’s handlebar.I think the Rossi maneuver is not fair.”

“He should have moved to the left so as not to hurt me because I was so risky coming off the track while at 300km / h, this is definitely not good, because it does not give enough room for other drivers,” Pedrosa explained.

Valentino Rossi opened his voice about Pedrosa’s protests, Rossi just said Pedrosa better to race himself. Because according to Rossi is a natural thing to remember the race leaving only a few laps.

“If Pedrosa is unhappy, he has to racing alone, I think all the racers do the same when I try to overtake them, especially if it happens on the last lap.” Riders like this may think that the song is special for themselves. “said Rossi.

Yep, thinking like this needs to change, Rossi is not in the position of the back so Rossi must make room for Pedrosa. Unless you overtake the rearmost racer then they will give you space.